Feeling Green is perhaps the most extensive and acclaimed project of mine thus far! It started as a final for a music video production course in July of 2020, and finally finished rendering to a completed work early that November.

As a multi-collaborative effort, the video features the musical stylings of midwest-based lyricist CUTE ERROR and my wife, animator-illustrator Kay Holland who gave life to the moving lyrics you can see below. With these assets, I combined and compiled an immersive 360-degree 2D/3D hybrid animated music video in Blender.

The work was showcased at the University of Kansas Tensies Film Awards in 2021, where it received awards for Best Animation and Best Interactive Media. In July of 2021, it was again showcased by the Mid America Arts Alliance for their Reflect/Project initiative to highlight "socially engaged video work by artists who identify as LGBTQIA+, Black, Indigenous, and/or persons of color."

The production phase itself took about three weeks from onset, but rendering all the assets into a cohesive experience took significantly longer. As it turns out, rendering 360-degree images even at a relatively low resolution takes quite a while on a Mac. For the curious, roughly 18,000 frames of animation over the course of three months comes out to around seven and a half minutes per frame!

One of the lovely lyric portions by Kay Holland. 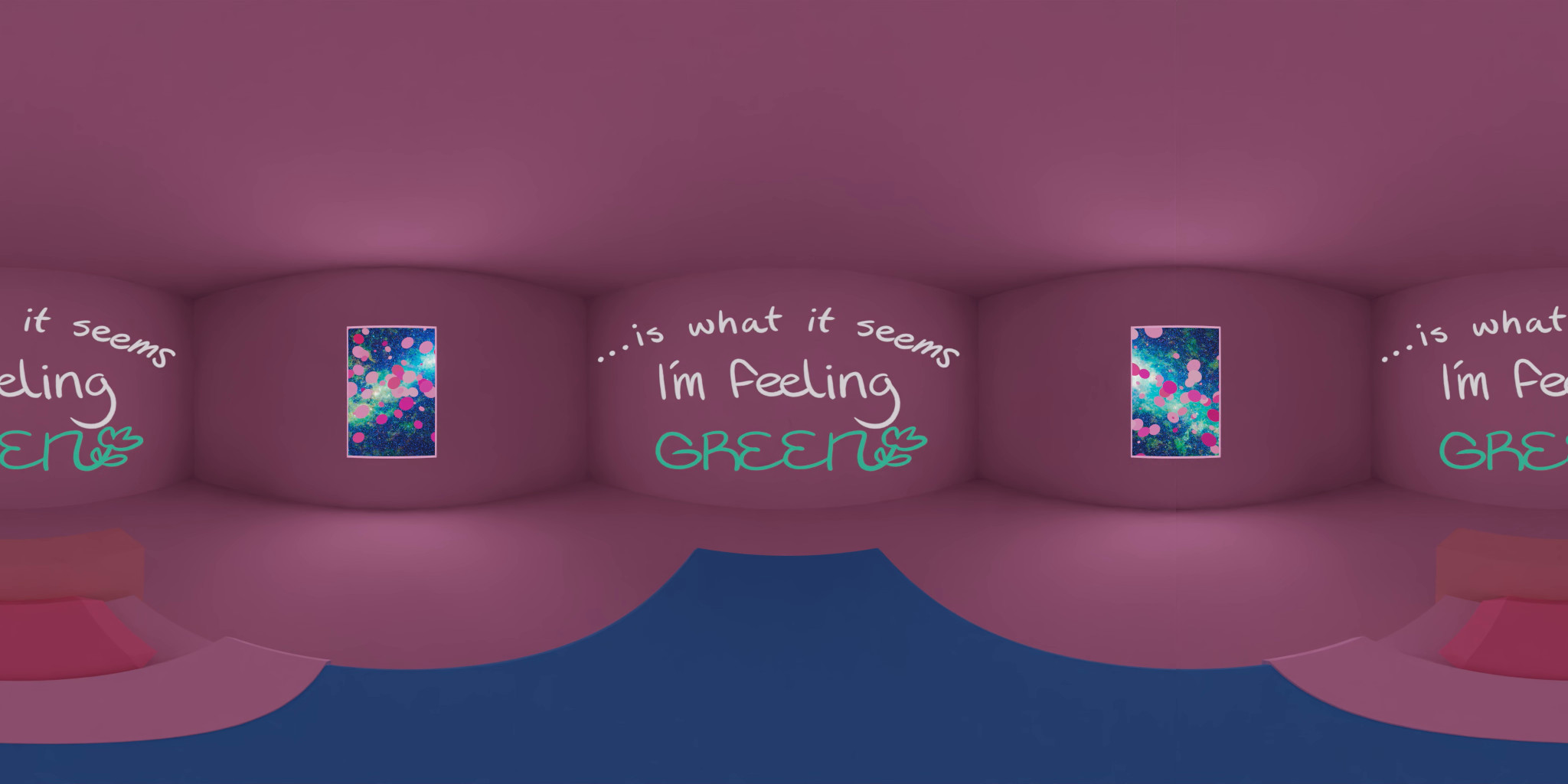 A screenshot from the start of the video, showing the lyrics. 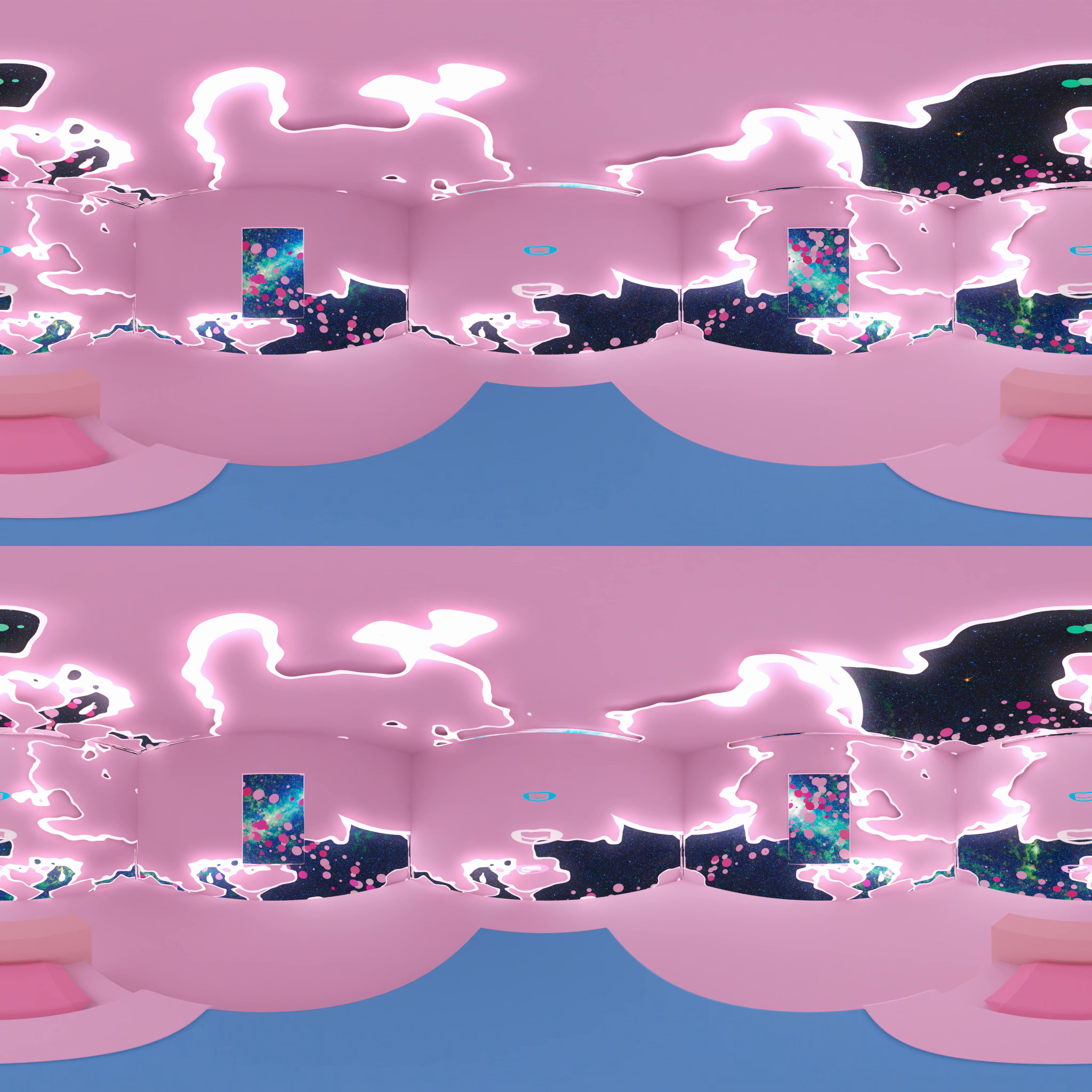 This is from the middle of the video, showing the room dissolve effect and how the frames rendered at 4096x4096 for both eyes. 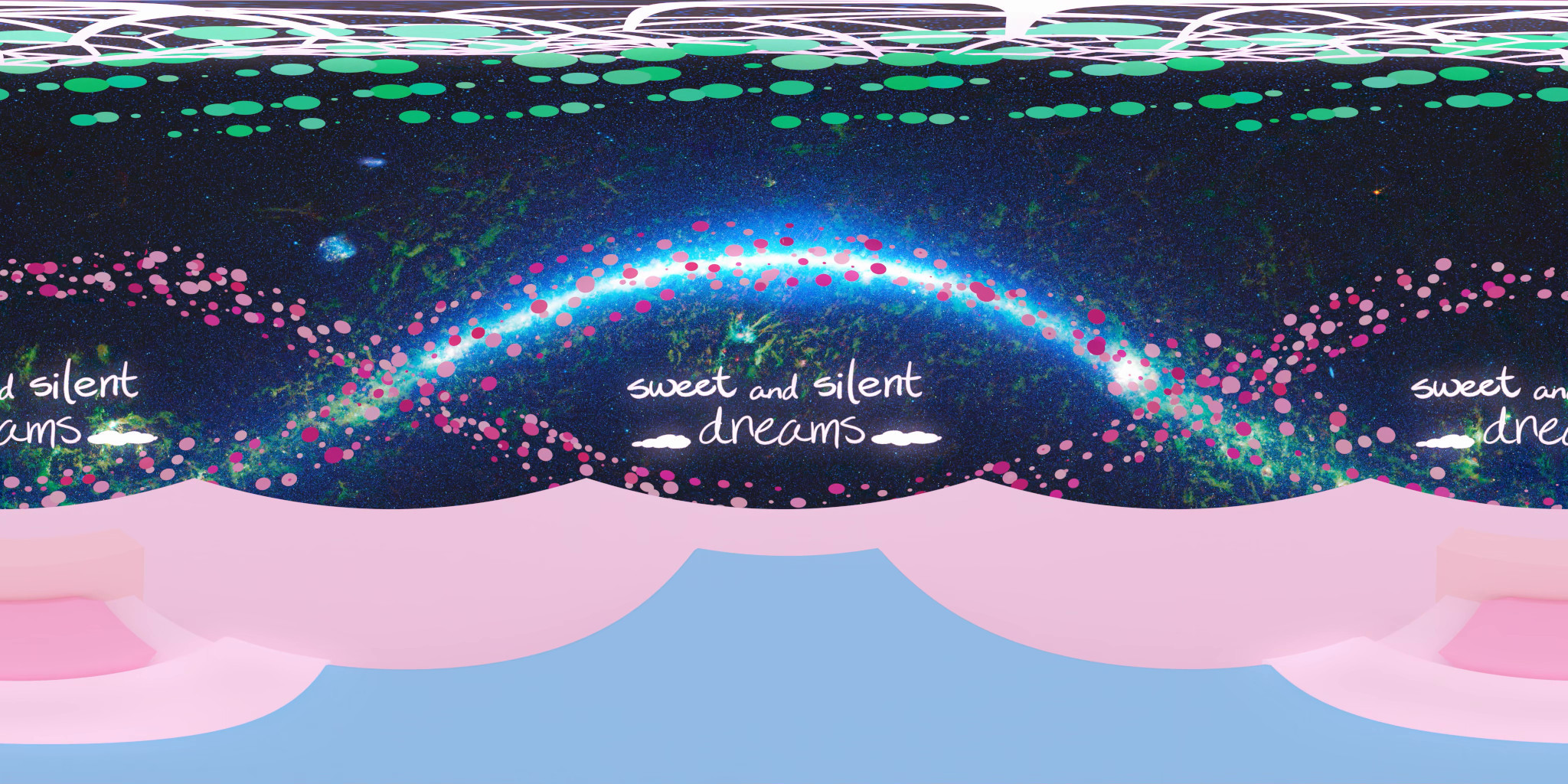 This shot is from the end of the video, showing the entire scene in its final form. 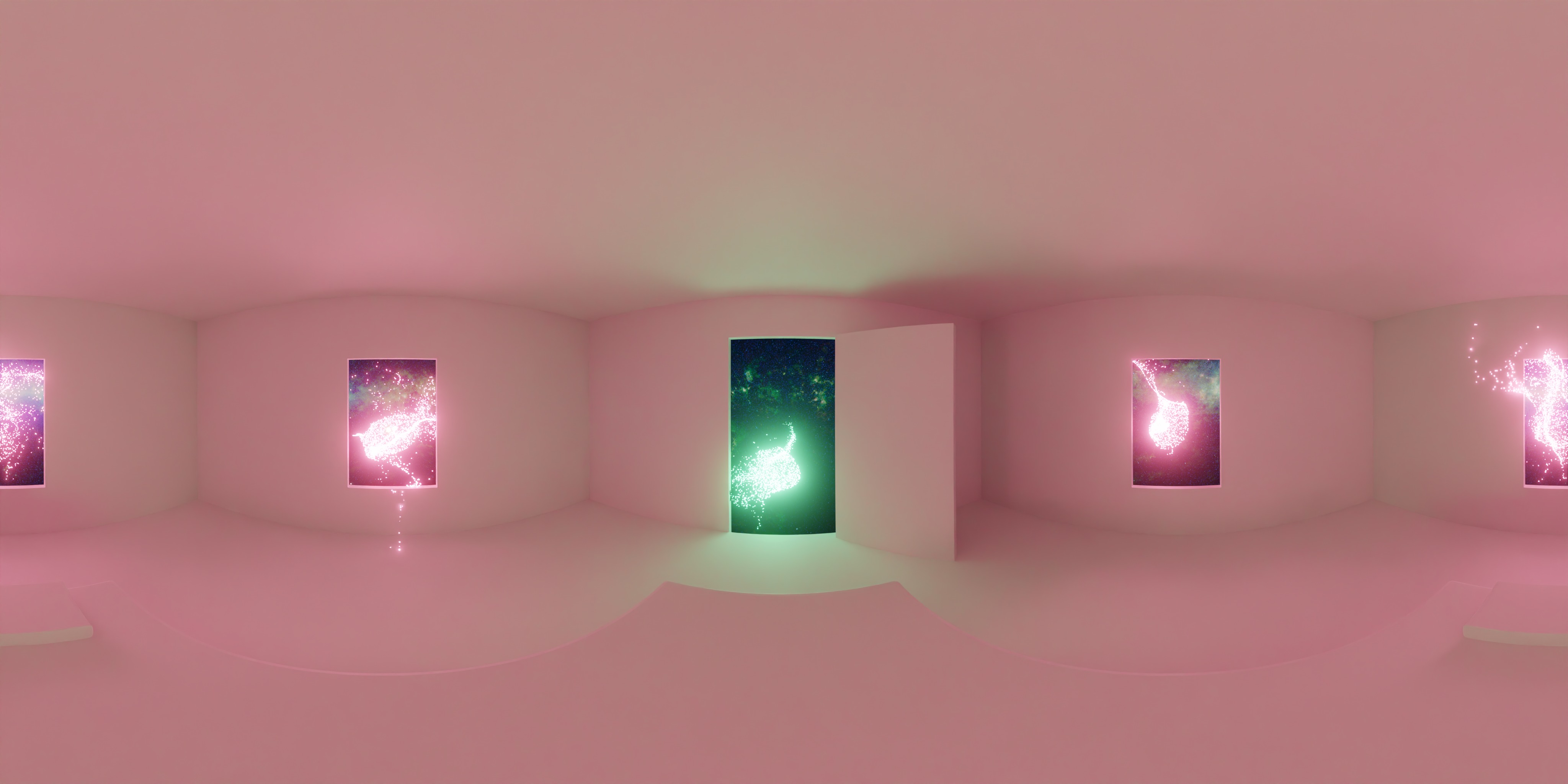 This shot is an early Blender test, showing the original concept. I had to pivot away from this idea because the only render machine I could use didn't have enough VRAM. 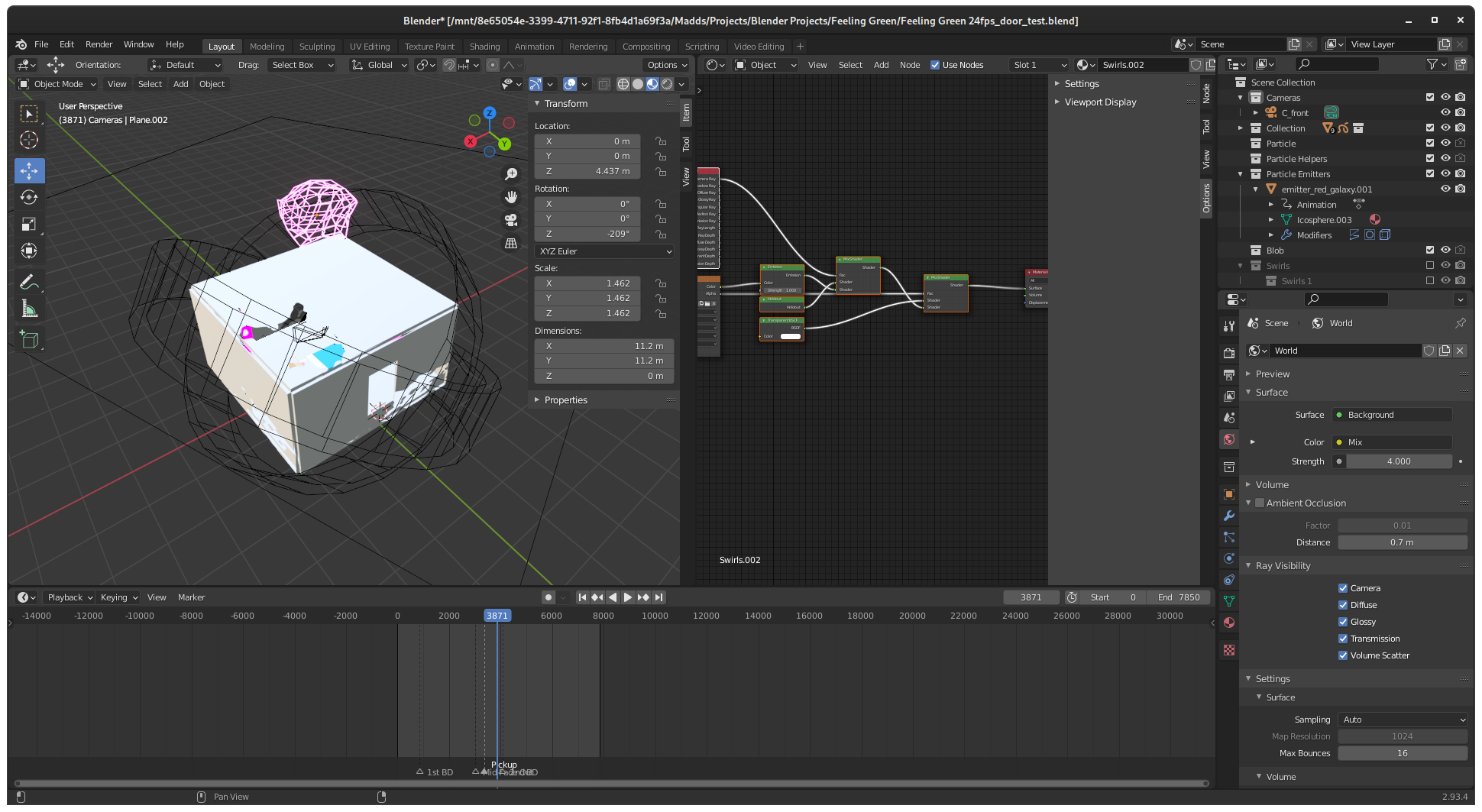 This is a behind the scenes shot showing my Blender setup for the final scene.